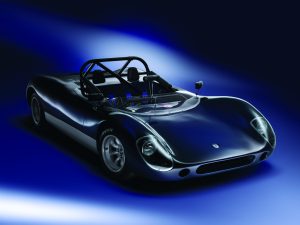 The Crosslé 9S Sports-Racing Car, as raced by Grand Prix drivers, John Watson and Peter Gethin, is one of the revered marques along with the Lotus, Chevron, Lola and Abarth who competed in the golden age of two-litre sports car racing in Europe.

Conceived in 1966 for the International two-litre Group Six regulations, the Crosslé 9S (one of the prettiest cars of the era) enjoyed considerable success on the race circuits of the Continent and the USA, and to this day they are front runners in Historic Racing on both sides of the Atlantic.

Crosslé drivers enjoyed podium finishes on such famous English circuits as Brands Hatch and Snetterton, competing against the more publicised teams such as Lotus and Brabham, but it was in the States that the Crosslé reputation for outstanding qualities of strength, safety and success were really established.
Testament to the lasting effects of these standards is Ian McCullough’s success in 1993 with his 9S which won the HSCC Group 6 Championship with the perfect score – six starts, six wins and six pole positions!

Now the Crosslé 9S is available as a “late run” series with a choice of modern production engines for road or competition use, built by the original factory on the original 60’s jigs and to the traditional Crosslé standards and adapted to suit any of your road or racing needs. The current batch of cars produced since the late 1990’s run the 2 litre Ford twin cam Zetec unit, built and sealed by Paul Dunnell. This is a relatively modern engine but in the spirit of the original 60’s twin cams they still run on twin Weber carburetors. The gearbox is the Classic 5 speed Hewland Mk9 and most cars use Avon list 1A/B tyres such as the CR500 or the ACB10.

The Crosslé 9s is a classic 60’s sports car, built to high standards, robust for sustained competition use, and capable of delivering scintillating performance. It has classically neutral handling and on road legal tyres delivers slightly more power than grip which makes it an enjoyable car to push to the limit as it gives satisfying driver feedback and will forgive the odd indiscretion mid corner. If you have never driven one of these less well known cars from the classic 60’s British sports car period then I recommend you do……Now! Just contact the Crosslé factory or visit their website here at www.crossle.co.uk 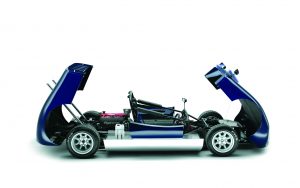