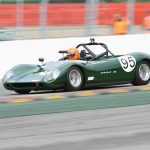 Well yet again the Crosslé Racing Drivers Club put on a great show at the Spa Ardennes Challenge with exciting racing, incidents and controversy all thrown into the mix.

With 9 x 9S cars in a capacity grid of 65 cars qualifying was always going to be hectic and even on the 7km circuit finding a clear lap wasn’t going to be easy. After 30 minutes of good dry weather, a warm but slippery and busy track just over half a second separated the top 3 Crosslés of Grau (2:48.488) , Ledger (2:48.757) and Hobbs (2:49.138). Next up was Pollard with a 2:51.272 and Taylor with a 2:51.506. For his first time at Spa in the Crosslé, Kennerley did well to record a 2:53.274 and Steve Ough did not have an easy time with more disappointing mechanical problems resulting in him barely completing his mandatory 3 laps, although his time of 2:54.891 wasn’t bad considering. Our hard working Chairman Eamonn Ledwidge qualified with a 3:03.665.

For once the Crosslé drivers were not at the sharp end of the grid with Grau starting in 13th position overall we had a dozen lightweight Caterham’s in front of us, the fastest being a Caterham R300 who did a time of 2:38.716, a full 10 seconds a lap faster than our fastest. 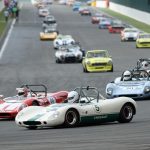 Heavy rain on Friday evening made all of us a bit anxious about being the first race out on Saturday morning but the sun was up early and the race would start in good dry conditions.

A rolling start of 65 cars is a spectacular sight and as we entered La Source and plunged down the hill to Eau Rouge there was plenty of very frantic racing. Hobbs got passed on the straight by a very quick BMW M3 a Tuscan V8 and the Cheng Lim Cobra, this compromised any chance of staying with Ledger and Grau but they were also being passed and at the end of lap 1 were down to 16th and 17th, Ledger going ahead briefly only to be passed by Grau. By lap 5 Grau was up to 11th with Ledger battling hard to try and get ahead. But what was more remarkable was that Steve Ough who started in 35th position after his qualifying problems was already up to 15th and chasing down Hobbs who was in 11th place. 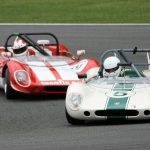 Around lap 8 the pit stops started and the Ledger Grau battle continued but they dropped to 20th and 21st place. Having pitted together the race was no less intense with Phil Ledger being constantly squeezed towards the wall as Heinz Grau looked to defend his position.

Finally Ledger made a move stick at a n opportune time as The Cheng Lim Cobra had a mechanical breakage resulting in an attention grabbing straight on moment at Eau Rouge, the car burying itself into the tyre wall halfway up the hill and leaving a long set of skid marks across the track, grass and run-off areas. This brought out a red flag which gave Phil Ledger the win with Heinz Grau second and due to either luck or good tactical planning depending on your point of view Hobbs was awarded 3rd place due to the fact that at the point of stoppage he had not done his pit stop. 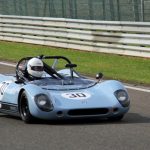 This was not illegal, but unusually for this year the regulations did not stipulate a ’pit window’ meaning that you could take your pit stop whenever you wanted, so leaving it late always meant there was a good chance of a red flag and with no penalty being applied.

The final results of Race 1 were officially based on total time for distance travelled and so this actually gave Hobbs first place overall and a fastest lap of 2:47.924. The fastest Crosslé lap was set by Heinz Grau, with a 2:47.365. 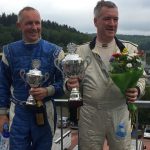 With first place overall in Race 1, it would be the Crosslé 9S of Hobbs that started on pole position and led the field on the dash to La Source. As expected the fast lightweight Caterhams were soon all over the Hobbs car, although he held on to 5th place for quite a few laps and as the pit stops started around lap 8 was up to 2nd place overall, Phil Ledger had made break from Heinz Grau and was pushing Hobbs continuously, the two of them changing places on a number of occasions. It was on lap 5 when a very fast charging Steve Ough moved ahead of Hobbs and Ledger and John Taylor decided to enter the fray. The Crosslés’ now held 1st, 2nd 3rd and 4th and were having a great race. But close racing can lead to the odd mishap. 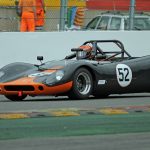 The 30 car (Hobbs) came into the pits followed very closely by the 52 car (Ough), Hobbs was a little too cautious about the pit lane speed limit and as they emerged out onto the Kemmel straight Ough had a better run of speed, got the tow and looked to pass round the outside going into the chicane, a bold move that would have worked but for another car already being there, Steve had to brake a little harder than Mark expected resulting in them coming together, Ough spinning and Hobbs taking to the escape road. With just minor damage to both cars they set about chasing after John Taylor who had yet to pit and staying ahead of Phil Ledger who was fast catching them. 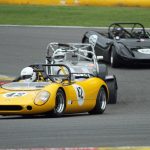 However, John Taylor had taken note of the late pit stop tactics of Hobbs in the first race and in almost a repeat of the first race a series of incidents bought out the red flag, giving Taylor the win for the Crosslés, followed by Steve Ough and Mark Hobbs.

And after a very successful first time out for Steve Ough in his new Crosslé 9S he took away the Crosslé Racing Drivers Club Perpetual Challenge Cup . Well done Steve!!

With Champagne provided by our sponsors Fluteau for 1st through 4th fastest times aggregated over the two races as well as champagne out our traditional Saturday night dinner, this was an outstanding event and you  can easily see why racing a Crosslé 9S with the CRDC is just so popular.

This was a super weekends racing, a great social event and once again the Crosslé Racing Drivers Club showed just what a great ambassador it can be for Crosslé 9s racing cars in the mainland European market.

Finally, I would like to say a big thank you to Ian McGowan for his sterling work as the official Crosslé Racing Drivers Club photographer. We have great photographs, just a selection of them are shown in this post but I will put more up in the next few days. Thanks Ian, your photographs are great.

The  ill thought out pit stop rule resulted in unsatisfactory results for some drivers, but hopefully this can be resolved for next year’s race and overall everyone had a great weekend racing on one of the best tracks in the world.

Can’t wait for the next round at Dijon!!